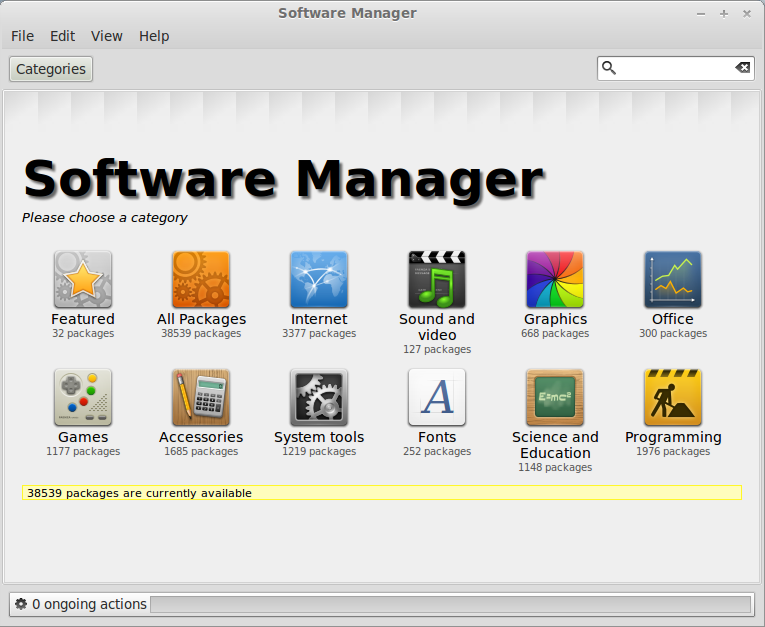 Cinnamon Desktop – I think this is the desktop environment that those looking for something familiar and who do not want to fight their desktop will be very happy to use. It is new technology (GNOME 3) in a familiar format, and out of the box, it brings some very cool effects to the desktop not available on a default installation of MATE, even a default installation of KDE. A screen shot of the default desktop with the menu showing the Applications column. 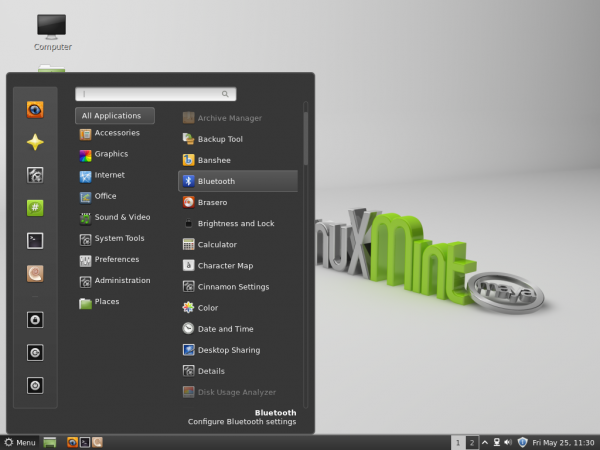 Cinnamon comes with its own Control Center from where aspects of the desktop can be configured. Other graphical management applications are accessible from the System Tools, Preferences and Administration menu categories. 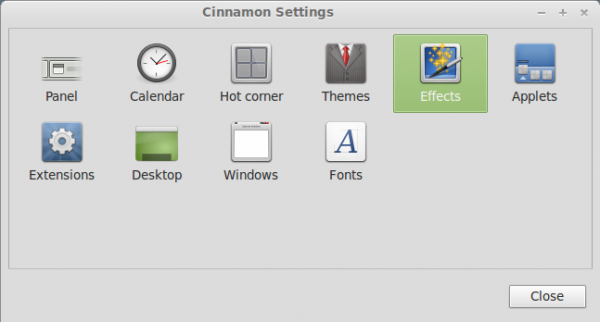 Aside from a few applications, Linux Mint 13 MATE and Linux Mint 13 Cinnamon share the same set of installed applications. There is, for example, Firefox for Web browsing. By default, Firefox 12 is the installed version, but on my test installations, it has since been upgraded to the latest and greatest version – Firefox 13. There is the GIMP, LibreOffice, Pidgin Internet Messenger (IM client), Mozilla Thunderbird (email client), Banshee music player, and Totem and VLC media players. In other words, almost every type of application you will need are installed out of the box.

On both editions, you can install anything that is not installed by default using Linux Mint’s Software Manager, a graphical package manager similar to Ubuntu’s Software Center. The main interface is shown in this image. 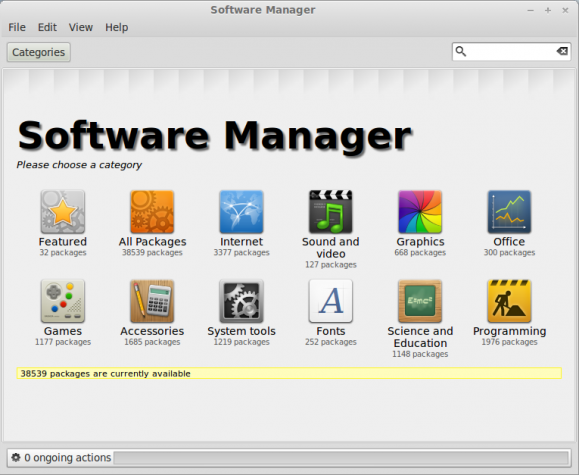 I have never felt any need to use MATE, not even for a minute. Cinnamon on the other hand, is a little bit more inviting, even though KDE, my desktop environment of choice at the moment, offers a lot more of what I expect from a desktop environment. Cinnamon is the future of Linux Mint, and I think that at some point, the MATE edition will be dropped completely. For the present, if you are trying to decide between MATE and Cinnamon, give the latter a try. You will enjoy using it more than MATE.

Resources: You may download installation ISO images of Linux Mint 13 MATE and Linux Mint 13 Cinnamon for 32- and 64-bit architectures from here. And read the Release Notes here.

This is the default Cinnamon desktop. I cannot help but ask this question: When will the developers get sick of this wallpaper? 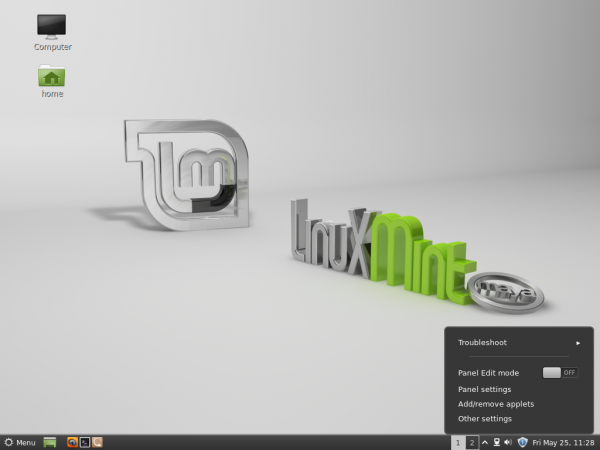 Another view of the desktop with the menu showing installed office applications. 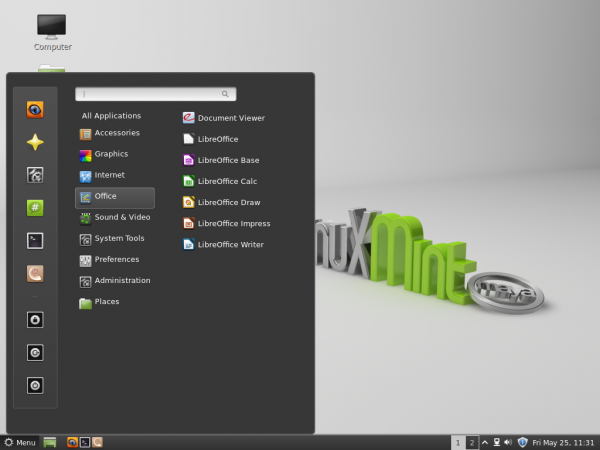 Yep, you can move the panel to the top edge of the desktop. 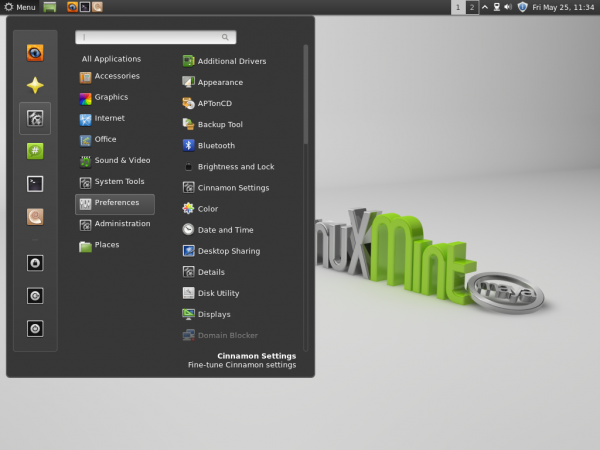 Expo-away. Do you know how many workspaces you can add on this thing? 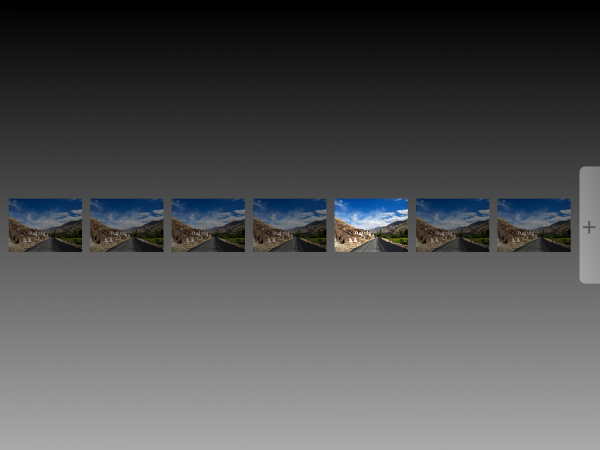 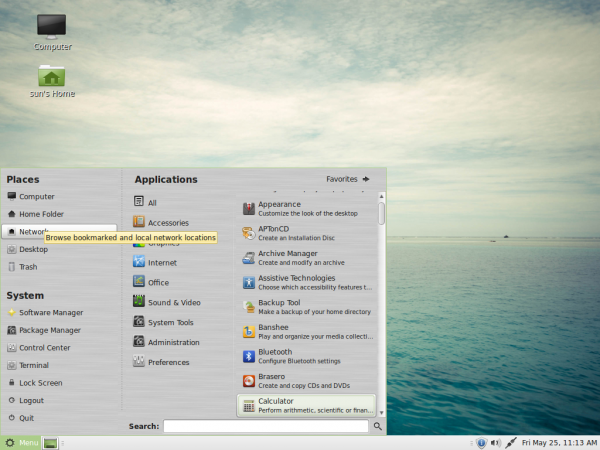 I have tried Linux Mint 13 with MATE and Cinnamon and while I agree that Cinnamon is the more visually pleasing of the two offerings it runs like crap on my Dell Latitude 2110 Netbook.

MATE has the edge on Cinnamon when it comes to configurability and is far better on low end machines or machines with poor driver support for their GPU.

@jungle_man Maybe I’m just n00bish when it comes to such things, but I’ve found KDE desktops insanely easy to break, even when doing such innocuous things as changing opacity settings and configuring desktop widgets… …three times on three separate distros, mind you. If I wanted that, I’d just go back to paying protection money to Microsoft and get it over with.

@stuffed-leaves As a Fluxbox/Openbox/Wmii user, I agree. GNOME 2 was the best user experience from a full-featured desktop environment ever created, and MATE, though a simple fork it may be, is a lovely thank-you to all the people who thought GNOME 3 was a bone-headed idea. (count me in) This is all withinin the spirit of FOSS, and I heartily applaud the efforts, as dated as they may be. The point has been missed, indeed.

some review. the title suggests a comparison of the two versions of mint 13, but you made up your mind before you even began. there are reasons to use mate instead of cinnamon, and mate is not comparable to macos8. having used both i find mate to run much more efficiently on my machines. i am not interested at all in desktop effects, i just want good workflow, which mate provides consistently.

After using LM 8 and 10, I tried LM 12. It seemed not finished. When I go to the control center then click on something like “Users”, the Control Center window disappears. So if I also wanted to click on Upload Manager I have to recall up the Control Center window. This didnt happen in LM10.
I also noticed when I call up some of these apps, that require admin password the cursor isnt blinking inside the password window. I have to click on it. Minor I realize but just seems buggy.
Does LM 13 also have same unfinished feel or have they worked out many of the minor bugs of LM 12? Is LM 13 more stable than LM 12?

Thanks for the tutorial. I just switched from Microsoft to Linux and I’m scrapping for information.

The MATE desktop with Compiz is actually very good, just like using Compiz with the Gnome 2.32.2 desktop in older versions of Linux; but the Cinnamon and Gnome Shell desktops have many new features that draw you towards them.

I have a problem. Im trying linux for the first try and decided to try Mint. Im trying it on eeepc 1001px, and updated via the updatemanager, now it says mine installation is all up to date, but I still cant connect to my ruter whit wireless, I find it but it will not connect. It works whit an cabel….

What edition of Mint did you install? Sometimes you need to enable the wireless with the Fn key switch. Have you tried that?

The password was changed, that was the reason. So it works out of the box 😀

1 thing that don’t work is the touchpad. Moving the mouse works, but not using 2 fingers to scroll, hit whit 3 to left click etc.. any sugestion how to fix that?

I think you miss the point of MATE. There are many people who use Linux primarily for development. All of the shiny/flashy effects look nice for daily use but when you’re trying to get real work done, they just get in the way.

Mint, prior to the release of Gnome 3 had the perfect balance of asthetics that don’t get in the way and performance.

It’s especially important for those running Mint in a virtual machine or laptop that doesn’t have good 3D acceleration support.

Hey i have a question i dont get the same installation type windows, mine only have the three hard disks and the next and back buttons and also the quit button but that is it i need help, i dont know how to intall this thing cause if i put forward it gives me error, please select a root(/) partition before proceeding

If you get that error, it just means that you have not partitioned the disk you want to use. You might want to take a look at the articles here for some help in partitioning the disk. Also, guide to disks and disks partitions in Linux is highly recommended read.

Your article misunderstands the reason for MATE. Sure it uses the older software, but it is popular because it is so highly configurable. Which is highly sought after in the open source world of desktop environments, when most current DE’s offer crap (mainly pointing at Gnome 3). Focused on non-configurable desktop without easy access making for inefficient productivity.
To put it bluntly it MATE isn’t about the fancy eye candy or the new current its about what worked and worked well.

Mate run compiz partially, but bluetooth do not work…

Cinnamon do not run compiz, but bluetooth work partially.

Sorry my English, where I wrote “better”, please read/understand “best”