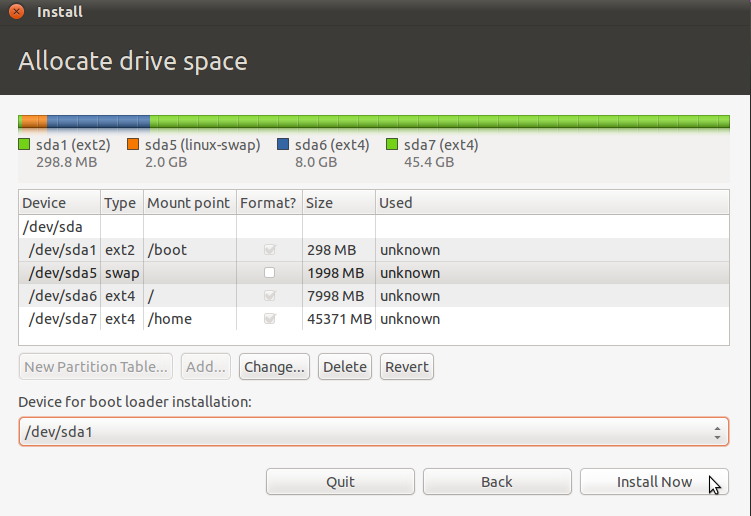 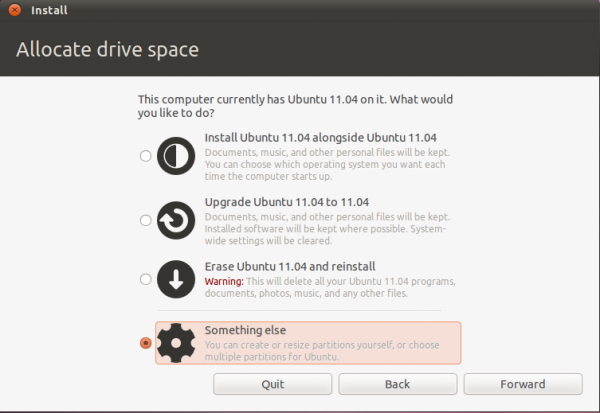 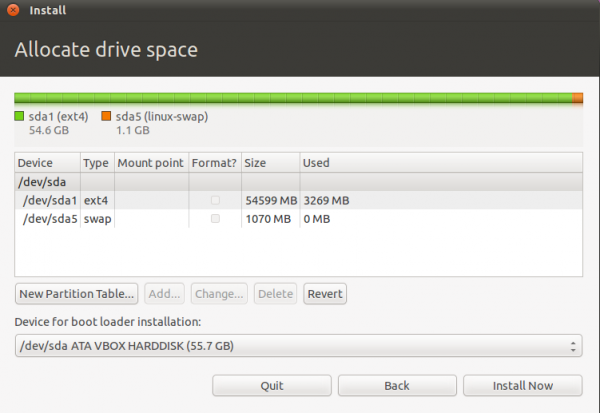 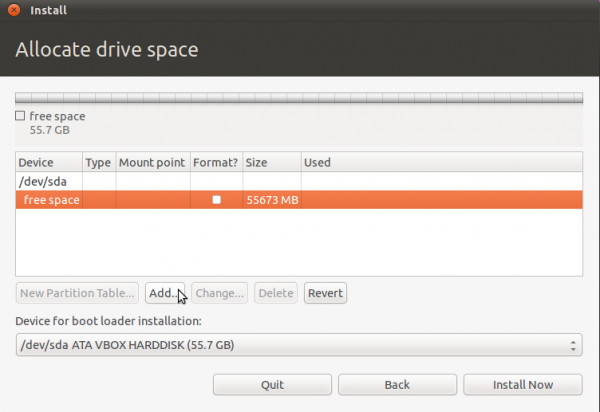 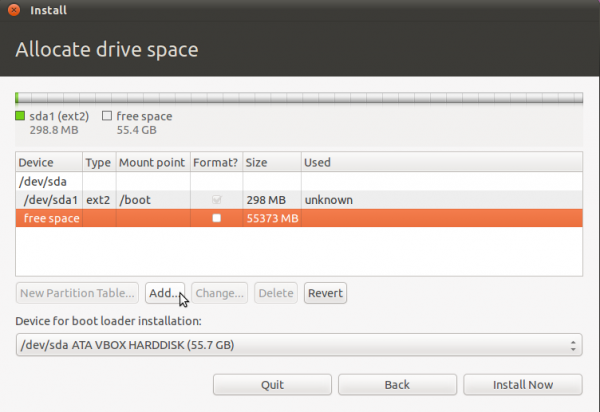 I have done all those steps. Ended up with an error about some EFI boot thing which requires at least 35 MB. I did what it told me, and I clicked install once again. Here’s where I’m confused. All it does it show a loading bar at the bottom and it finishes quickly and then it closes down. All is left is my cursor continuously loading. How long does it take or is it messed up

If it’s taking that long, then it’s messed up.

Btw, what version of Ubuntu are you installing and on what kind of hardware?

I was trying to use Ubunto 12.10. I think I just had to connect my ethernet cable because everything popped up fine. I think my computer hardware is messed up tho. At some moments, the tv would lose signal. I guess it’s my gpu, because it was a little bit before i tried installing ubunto.

Thanks for the easy to understand and follow guide!

Thank you so much for this guide. I was totally blank when I oprnedup the partition table and saw so many different mounts. Very helpful. 🙂

thanks for the well structured explanation of partition schemes…extremely helpful!! i finally feel like i can correctly partition a HD with a linux distro

hey
i would really want advice on what to do..
i have ubuntu 12.04 on my hp pavilion dv6… the ubuntu is only in one partition, i want to create other partitions…. is it possible for me to do that without the system crashing????

Without knowing what partitions you have and how much free space you can recover, it’s hard to say. More info about your system will help.

No… it can’t be done but if u want to install another unbuntu than it’ll b done.

Yes this was a good explanation. I have used the manual partitoning before but was mixed up on which ones did what and what sizes they needed. This also helped with the order they should be in. Doing a reinstall now on a second drive in a two drive system. The comment about using /home and not having to do a full reinstall to fix a bad / or /boot will be helpful too. I would like to see included at least a brief explanation of the other partition options like /var /usr /tmp and the others that are given. Also what might be good uses of the different types of file systems that are not covered here, the journalling verses ext2, ext3, ext4 and others. If it is covered elsewhere on this site I will have to look it up. I found this page by search engine.

Thanks a zillion. Really helped me setting up the partition table smoothly.

Well, I am close to installing xubuntu 11.04 on a friends old compaq – i have been working tirelessly to try and get ubuntu and versions of xubuntu to work.

It seems like I needed to set up a partition scheme. I have followed your instructions on here and, even if I encounter problems with the install, I just want to say thanks a lot for a brilliant set of instructions.

One thing I would add though, for each step of the partition maybe just a brief description of what each partition represents.

absolutely great work, all the same – I really appreciate it! thanks 🙂

Thank you. Your suggestion will factor into the next tutorial.

tnx a lot for this guid 🙂

Thanks – helped me get all set up when I hit the “no root file system is defined” error – likely I needed to add a “/” system and format the boot as Ext2.

Thanks! Best guide and explanation without talking over people’s heads. Told me just what I needed to know. Thanks again!

Wow! Very informative, just what a newbie like me needed to install Ubuntu correctly on an external drive and NOT over Mac OSX by mistake. It all makes sense, so thanks for explaining the jargon, too.

Superb, a little long winded maybe on the preamble, but once you get into the actual bones of it this is a quick and concise explanation that helped me do exactly as i wanted to do.

Thank you for this guide. I have one question though. Is it necessary to have the root partition be separate from /home?

No, it is not. You can just create /boot and /, or even just a single root partition.

It is not required to have a separate partition for /home however doing so can save you some work down the line, if you are tweaking the system a lot and want to reinstall in case of an unrecoverable problem for instance. A separate home partition will save you losing your personal data and make the recovery much less of an ordeal.

Nice article, I was able to install Ubuntu successfully. However I noticed that my previously installed win7 on the system is gone. I am only worried about my data, is it possible to get them back? I know I should have taken a back up before doing any experiment, but the damage is already done. Any kind of help will be greatly appreciated please let me know if you need any more details.

Which option did you choose at the disk partitioning option step? Was it “Something else,” “Replace Windows” or “Install alongside Windows”?

If you do not remember, try and see if you can access the Windows partition when you are in Ubuntu. If you do not know how, read http://www.linuxbsdos.com/2012/01/02/how-to-access-microsoft-windows-files-and-folders-from-linux/

Thanks for the reply! I remember I had selected the option “something else”. Still it looks like windows is gone, something might have been messed up during partitioning. Also I read the other article you had mentioned, I do not see any of the windows hard drives in Ubuntu, does that mean all the windows data is lost? Is there any way to recover them?

if you installed over Windows, rather than alongside it, then you hosed Windows. If you can, send me a screen shot of Nautilus, the file manager. Send it to the email here.