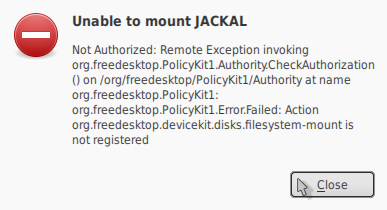 Double-listing in the menu is not the only problem with the Users and Groups tool. That actually is not a problem per se. The real problem shows up when I attempted to use the application. For instance, trying to change some of my settings, or trying to create a new user with this tool gave the error message shown in the image below. Did anybody test this application before the distro was released to the public?

UPDATE: After one reboot, error messages no longer came up and I was able to add new users and modify other user account details. But another problem did come up and that is that I could not login with a new user account that was created . Very odd. After three failed login attempts, the account is automatically disabled. Excellent feature, but I’ll like to be able to login using a secondary user account, or be able to create an account for someone else.

Playing Audio and Video Media – Trying to play an audio or video media on Sabayon 5.3 was more problems than I had expected. Normally popping in an audio CD or DVD video in the optical drive should cause the system to automount the media, but that did not happen. With a DVD video, the following error message was generated when I clicked on its entry in the Places menu.

For the audio CD, though also not automounted, an icon for it showed up in the bottom panel. Clicking to mount it returned the error message shown below.

Screen Resolution – The default resolution on my LG FLATRON HDTV LCD display is 1920×1080. Thing is, I prefer working under 1024×768. It’s easy to change the resolution with the Display utility. To get the correct settings for 1024×768, you need to set the Refresh Rate to 75 Hz, which is not available as an option in the drop down menu. So if you change to 1024×768 using the only available refresh Rate, 60 HZ, the screen will be displaced about one inch to the left.

This is the monitor settings utility

Screensaver – One other minor issue I found with Sabayon is that the screensaver is disabled out of the box. This might appear to be nitpicking, but the screensaver is not just a fancy application. If properly configured, it forms part of the physical security barrier to unauthorized access to your data. It is one of those features that should be enabled by default, so that new users know that it is there. They can disable it if they so choose.

Final Thoughts and Recommendations – Sabayon has all the features it takes to make a very, very good distribution. Problem is there are too many features that do not work as expected, too many applications in the default installation that are buggy, and one or two applications that should not even be installed. I wish the developers will just take a lot more time in between releases, give their beta testers and general community more time to report bugs.

Per my recommendation, I would not recommend this distribution to a new user, or a user just looking for something that works out of the box. There are better alternatives. If you do not mind fixing stuff that should have been fixed before the distribution is released to the public, you will find Sabayon fun and – I’m guessing – challenging.

Resources – There is an iso image for GNOME, KDE, LXDE and Xfce desktop environments. I could not get the KDE version to install successfully, but your mileage may vary. The GNOME version was what I used for this review. Unless you have a lot of time to kill, avoid the Xfce version. Why? Aside from system utilities and desktop accessories, the only significant application installed is Firefox. It’s almost barebones in terms of installed applications. You will find a list of download mirrors here.

Hope you learned a thing or two from this review. There are more reviews and tutorials coming down the pike. If you don not mind, take a second or so to subscribe to this site via RSS or email to have future articles delivered automatically to your inbox or feed reader.