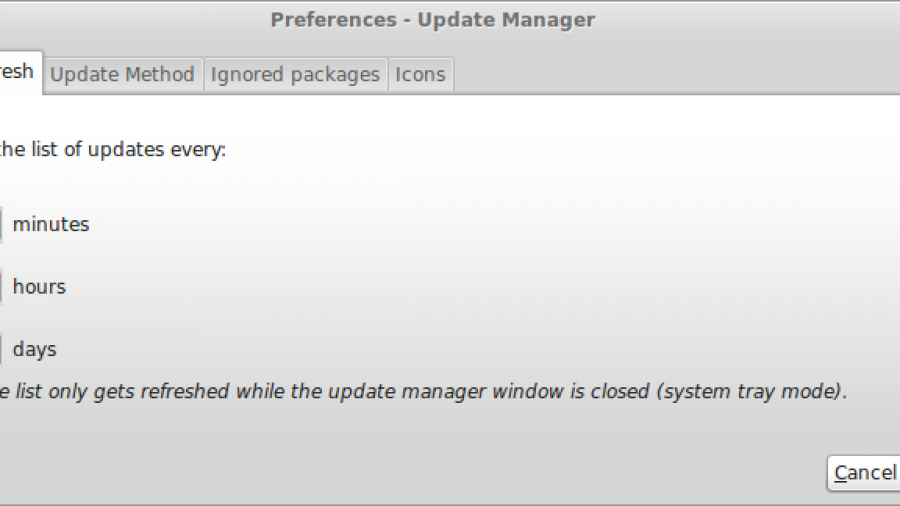 The default wallpaper on this edition is the same one, with only a slight modification, that has been in use for several releases of Linux Mint and Linux Mint Debian. I know this is easy to change, but when will the developers get tired of using the same wallpaper with every release. It is not even that the wallpaper is that good. Other popular distributions tend to use a new wallpaper for each release. Modifying the wallpaper is accomplished via the desktop settings tool. Your choice of wallpapers comes from those that shipped with the system, and those you may have downloaded from the Internet. Unlike the desktop settings tool of KDE, it does not give you the ability to download and install directly from the Internet. 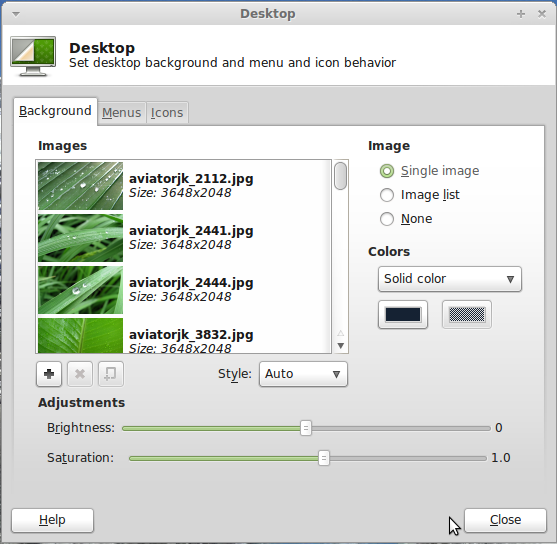 For my taste, this is the best I could find that shipped with the system. There is something about bodies of water that just appeals to me. 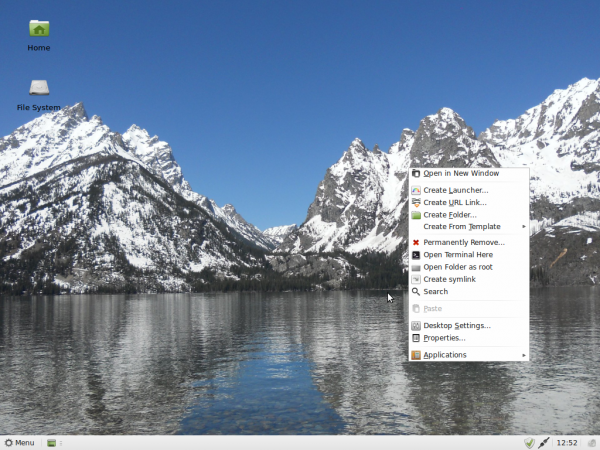 In terms of installed applications, there is very little difference between this Xfce edition of Linux Mint Debian, and Linux Mint Debian MATE/Cinnamon. Installed, are LibreOffice 3.4.5 (the latest is version 3.5.3). There is no telling when an update to the latest version will hit the repository. Aside from LibreOffice, the other office suites (KOffice and OpenOffice) available for installation are not current. KOffice 2.3 is the version of that office suite in the repository. The problem here, is that KOffice has since been forked, and the fork is called Calligra, the first stable version of which was released just last month. Also, OpenOffice, which is now under the administration of the Apache Software Foundation (ASF), has since been renamed to Apache OpenOffice. The first version of Apache OpenOffice is yet to be released.

On the Web browser front, all the popular and not-so-popular Web browsers are available in the repository, though, not necessarily the very latest versions. For example, Firefox, at version 11, is the installed version of the popular Web browser from the Mozilla Foundation. The very latest and greatest is Firefox 12. I am sure you get the picture by now. A Linux Mint Debian edition is not going to be your choice of distribution if running the latest stable version of your favorite applications is important to you. 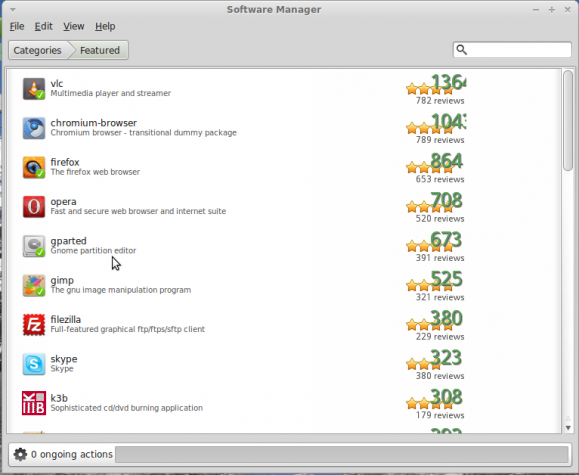 Out of the box, the system is configured to check for updates 30 seconds after booting and every 15 minutes thereafter. Considering how infrequent updates become available on a Linux Mint Debian edition, daily updates should suffice.

From a network security angle, this edition is in worse shape than the MATE/Cinnamon edition, which has just one open port (port 111) listening by default. Besides port 111, Linux Mint Debian Xfce is also listening on TCP ports 139 and 445, even with the firewall disabled. If you are reading this from an installation of this edition of Linux Mint Debian, or the MATE/Cinnamon edition, be sure to enable the firewall. On that note, you might want to read the first thing to do after installing Linux Mint Debian 201204.

Every distribution, every desktop environment, has its share of supporters, some of them fanboys. I have no particular affiliation with a any distribution or desktop environment that extends beyond just looking for one that meet my computing needs. Linux Mint Debian Xfce is not one of them. Aside from the desktop environment being too drab for my taste, there is this likelihood that something might break when the next batch of updates becomes available. That is why Linux Mint Debian might not be what you want to use if you are new to Linux. Try the Linux Mint, the line that is based on Ubuntu.

Resources: Download links for 32- and 64-bit editions of Linux Mint Debian 201204 Xfce are available here. Support questions may be posted on the projects forums.

The default desktop with the menu showing installed graphics applications. 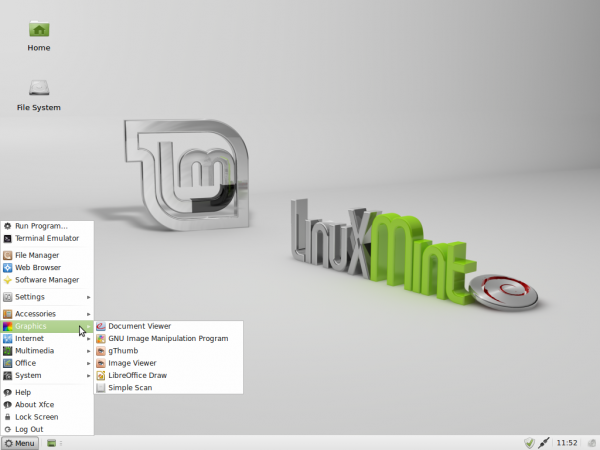 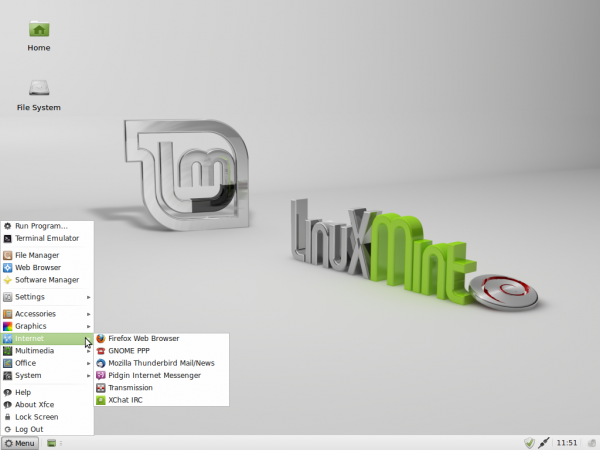 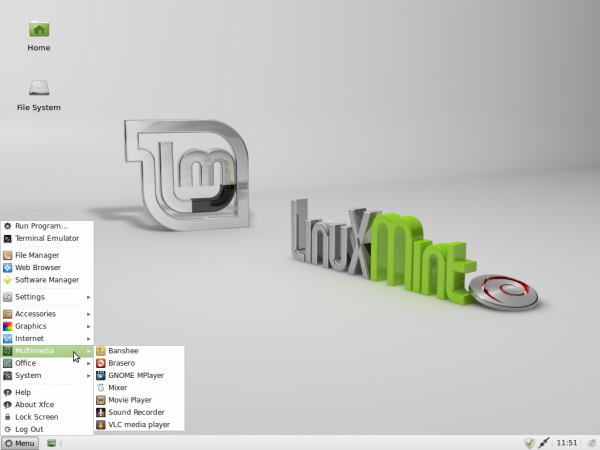